They say, the more you expect, the bigger your disappointment. And so it was with McCarthy.

We left Valdez in a drizzle. The skies were going to clear eventually, but we figured they were cleared enough. And we were ready to move on. This time, going through Thompson Pass was beautiful. The landscape is otherworldly and I thought, maybe we should stay here a night just to explore. But, we were looking forward to McCarthy and a new adventure.

The Edgerton Highway was well paved for most of it; there was one area where a slide must have occurred and drunken road builders smeared new tar on the road as if it were cream cheese on a bagel. 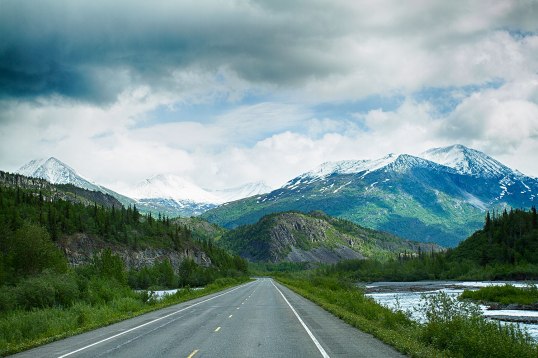 Since we didn’t know anything about the area, we pulled into Wrangell View RV Park right outside of Chitina. I kicked myself for not over-nighting back in Thompson Pass. Wrangell View RV Park is a convenient place to stay, nothing more. The sites are lumpy, disorganized, and very close together. The water pressure is weak, the power under voltage, and we didn’t even bother with the sewer connection. There was no phone signal, no wifi, no cable, nothing that would merit the $30 we spent. More hindsight – we should have kept driving. Since the place was awful, we decided to go ahead and tour McCarthy immediately – we didn’t want to have to spend two nights here.

We drove through Chitina, a pleasant little town, through the cut in the hill, and across the bridge. I highly recommend anyone making the trip this far to keep going to here – there is boondocking and dry camping on the river with lovely views and space. 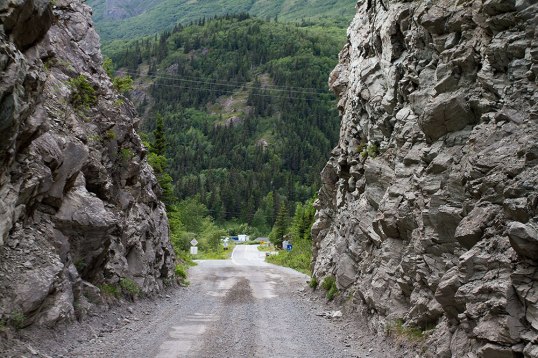 The gap in the hill 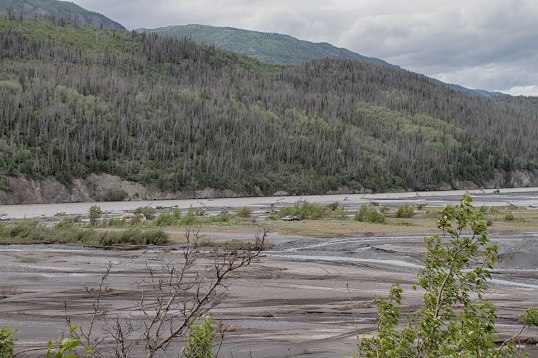 Except for the first mile or so, where the side of a cliff is falling down, the road to McCarthy has been vastly improved. There are 14 paved miles – all the way to the Kuskulana Bridge. 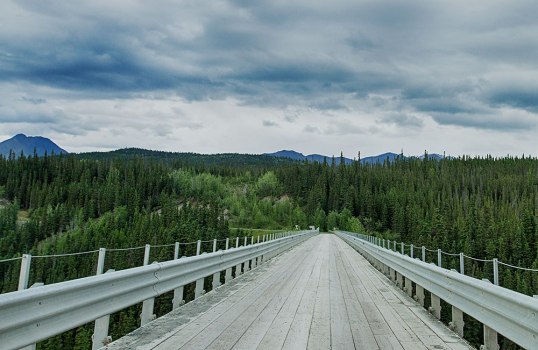 Then the road is dirt and gravel but not unpleasantly so – we averaged 40 MPH with stops along the way in our jeep. It takes a while due to distance, not drivability. Along the way we spot beaver dams in ponds, squirrels, a dog, and a grizzly bear. He was napping, but got out of the road when we got too close.

The road to McCarthy

At the end of the road to McCarthy, we park our car, pay the $5, and walk across the bridge. There is no one there but one wild eyed woman holding a wad of tinfoil closely. She nodded hello and rushed on.

The bridge to McCarthy

We walked the mile or so into town, hoping for a shuttle bus to come along to take us up to Kennicott. It was five miles away and,since we didn’t have much time, we didn’t think we could make the walk up in time to allow us to see the mine before it all closed. In town, which was mostly deserted, we didn’t see much of anything. Everything was closed except the general store where we got a hot cup of coffee and some candy – we had forgotten to eat lunch. We wandered around for about half an hour- still saw no shuttle bus – then gave up. We walked the mile or so back to the car, crossed the bridge, and left. We didn’t see a shuttle bus the entire time, nor did we see many people – one local (running the store) and five people coming in to work for the summer.

Store in McCarthy – not open 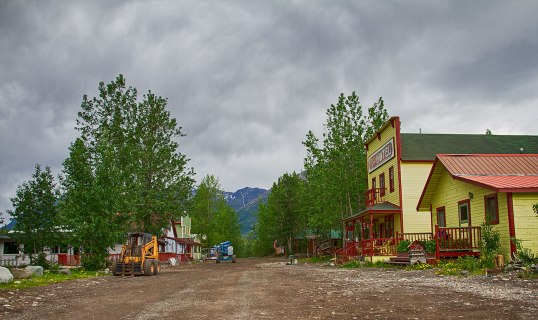 Maybe it was because we hadn’t eaten. Maybe it was because it was raining. Maybe it was because my expectations were so high. I think it was more that my expectations were misguided. In McCarthy, I was expecting a town similar to Terlingua, Texas, a town that grew organically from the ashes of what used to be. McCarthy is more akin to Tombstone, Arizona. It is recreating itself to be a tourist ‘mecca’ rather than a self sustaining outpost on the edge of the wilderness. It has a falseness about it; every aspect seems to be screaming for tourism – not a place for living.

If I had been smarter about it, I would have planned, like Sarah of See Where the Road Leads. She is taking a plane tour directly to Kennicott. But, I had hopes for McCarthy. No – expectations. So I again learned a lesson: stop expecting so much and I won’t be disappointed.