Return from the Dalton

The return trip on the Dalton Highway was pretty uneventful. We could make faster time because we knew the roads and in the 2.5 days we were north, some road repairs were made.

South on the Dalton

There was a slight pucker factor when we saw this in our windshield:

One of the hills on the Dalton

We didn’t remember anything this steep on the way in. We took as much of a running start as we could and hit the top at a respectable speed of about 25 MPH.

The view on the other side: 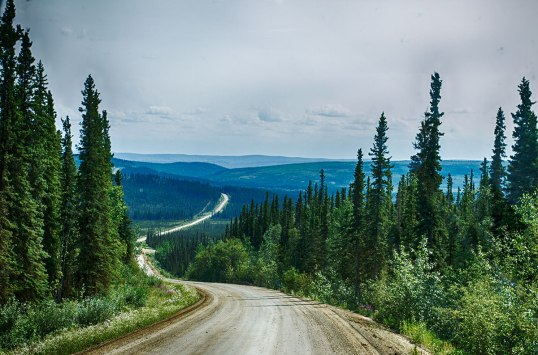 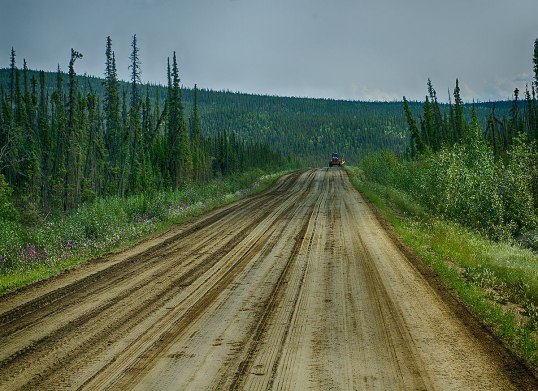 See, there is dirt on the Dalton – road crew grading the surface

Sometimes those road crews work really fast! And then we hit it – an area that was being freshly graded. It wouldn’t have been so bad had it been a flat straight away or if we didn’t weigh 26,000 lbs, or if we hadn’t had to slow when a truck passed the other way. Our guess is that when the crews grade the dirt, they first wet it down. A lot. Then they drag it repeatedly to get the dirt churned up and soft enough to roll. Then they add calcium chloride as a kind of binding, stabilizing agent. And then they roll it all flat. We hit an 8% grade up after they wet it and dragged it but before they rolled it.

Anyone who has driven a lot in snow knows the tipping point: the moment when weight and gravity overcome forward momentum on a slippery surface and one begins to slide backwards while going forwards. If lucky, forward movement is faster than backward movement, at least long enough to crest the hill. We hit that moment, just short of the crest of the hill. Creeping along at 10 MPH, though the gas pedal was to the floor, we crested the hill just as we slid back.

We were extremely thankful and continued carefully to 60 Mile Camp where we could assess the damage.

Yuck! Mud was caked everywhere. I really wish I had taken pictures because words can’t describe the amount of mud. We couldn’t see the headlights or foglights of the jeep; it was as if the entire front end was one solid mass of oozy ick. Just imagine a 2-4 inch thick blanket of mud thrown over it (people pay a lot to do that to themselves). My bike on the back was unidentifiable – it could have been a kayak. In each Short Bus compartment, 4 inches of mud was caked on the bottoms of the door where it met the frame. Mud had worked its way into the sewer drain compartment and the propane compartment as both had openings to the ground below. The wheel wells, exhaust, frame, bumpers, everything was covered in pounds of mud. We do a lot of off roading and have been known to take a turn through the mud just for fun but we had just never experienced it on this scale. It was probably due to the size of the Short Bus – we must have knocked about 500 lbs of mud off the vehicles in that parking lot. But, we lived to tell about it and now we can check one other bucket list item off (okay, mudding in our RV was not on our bucket list but it was something we accomplished so…).

We had a decent night’s sleep (the sun sets for about an hour before it rises again) and continued the last 60 miles of the Dalton. 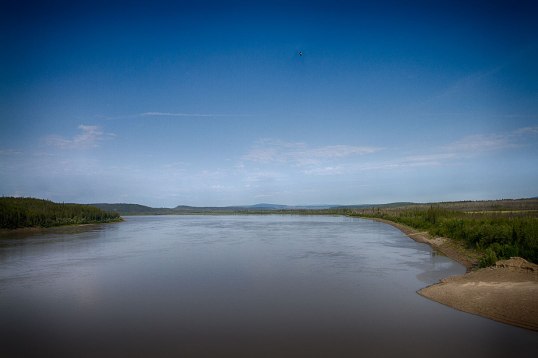 Yukon River Bridge on the Dalton

It started to rain when we had about ten miles left on the Dalton. As we had done many times on this trip, we repeated our mantra, “I think I can, I think I can.”

Dalton Highway – we kept running into the red and white German plated class C but we never got a chance to talk to them.

We made it off the Dalton and onto the Elliott. The rain eased up and we had an easy trip back down to Fairbanks through the fire zone and into the city. 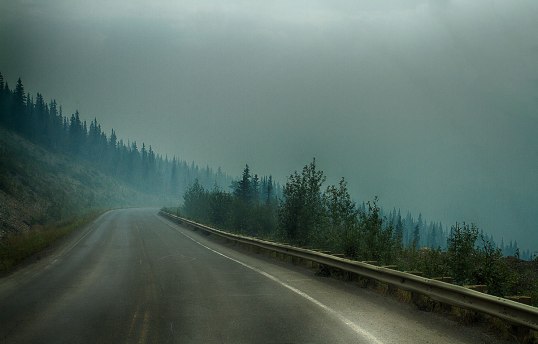 Notes on the Dalton Highway

We read all the scare stories about how horrible it was, how one needed extra gas cans, two spare tires, various other parts, etc. but we also read of other RVers who had done it. One in particular was extremely helpful: FulltimeUSA. I took my inspiration from him, though he no longer blogs. We didn’t carry gas cans. We had a spare for the jeep but none for the RV. We have a spare air filter for the RV and various tools and duct tape, but that is about it.

We had plenty of time.  We could go as slow as we needed to as we didn’t have any schedule to keep. This was probably our smartest move as too many people drive too fast. That is how one blows a tire or loses a windshield. Since we didn’t feel any pressure to get from point A to point B, or any pressure to even drive the Dalton, we had a much better, safer experience.

We watched the far off road as much as we did the road immediately in front of us. On the Dalton, one can see for miles. If we saw a semi behind us, we prepared for him to pass us: we slowed down and either found a very wide spot or even a pull off. It slowed us down but it was safer for both us and the trucker as typically, they were going significantly faster than we were. If we saw a semi coming towards us, we slowed down and moved as far over as we could. Slowing down probably saved our windshield – we were hit by quite a few rocks but we suffered no damage. If we were going to meet a semi on a hill, and he/she was going down, we got out of their way. With the narrowness of the road in most places, combined with the unevenness of the road surface, we were worried they might bounce right into us. While we had a few close calls, we came out without a scratch.

There are way more motorcycles on the Dalton than one would expect; from our discussions with bikers, it seems to be a bucket list item, much like it is for everyone else. We slowed down when passing them the other way, more for their safety than ours. If a rock can break a windshield imagine what it can do to a human body.

There were plenty of other RVs on the Dalton though we saw few trailers or fifth wheels. We only saw one other Class A but plenty of Bs and Cs and dozens of truck campers. Just from experience, the smaller you are the easier it is.

I guess the gist is: we went slow. We did about 680 miles on the Dalton and had absolutely no damage (other than the mud) to either of our vehicles. Going slow also gave us more time to enjoy the ride. And we did. Would we do it again? Probably.  But we would wait until the end of August to see the changes fall brings.

2 thoughts on “Return from the Dalton”