After Fairbanks, we decided it was time to head south. Belle was sick, my allergies were raging, and we were all very tired. We needed to stop in North Pole to pick up a couple of gifts, meet up with a couple of people and take a look around.

We decided to stay at Chena Lake Recreation Area. The recreation area has very nice widely spaced campsites with a good bit of privacy but no hookups. It was very quiet, as we were the only RV in the entire loop.

North Pole, Alaska is another city I had expectations of that quickly let me down. There was a christmas store and a few light poles painted to resemble candy canes but other than that, nothing. Having been to Alpine Helen, Georgia and Leavenworth, Washington, I thought just a little effort was in order for a place named “North Pole.” But no such luck. We stayed two nights and couldn’t think of any reason to stay longer.

We decided to head to Chicken. On the way, we stopped in at the Delta Meat & Sausage store. I love buying local and love trying local foods even more. We bought two different kinds of sausage, smoked cured bacon ends, and a pound of ground yak. Since then, we have tried them all. Some of the sausage went into a macaroni and cheese. It was milder than I expected, being jalapeno sausage, but it was fully flavored otherwise and added a great counterpoint to the smoothness of the cheese. Some of the bacon ends were great cut up and fried and used for baked potatoes and to flavor peas. The yak – boy was the yak good! It was only a pound and now I kick myself for not buying more. The yak was as mild as filet mignon, a little sweet, and tasted wonderful in homemade ‘sloppy joes.’ I expected something much stronger and a little gamey, hence the sloppy joe preparation; if I get the chance to do it again, I will probably go for yak steaks.

The Taylor Highway to Chicken was surprisingly well kept. A bump here or there, a rough patch, but nothing worse than any other road in Alaska. And the views were outstanding. We drove to about 10 miles outside of Chicken and decided to call it a night. We pulled off into a large gravel area with beautiful views and watched the approaching rain.

pull of with a view

When we got up in the morning, the rain was still threatening. We got an early start and headed to Chicken. There are actually three ‘Chickens:’ the one on the main highway, the one to the left on airport road and the one to the right on airport road. We decided on the one to the right as it seemed the most authentic. And they had cinnamon buns. We didn’t stay long, rain was coming, but I could understand how it would be very easy to pull up a chair and stay for a while. A long while. This is what I expected of McCarthy: a warm comfortable feeling with a beautiful view. There were quite a few people there, mostly Alaskans, and they didn’t look like they were going anywhere soon. And I would have quickly joined them. Some times, when one gets to a place, one just knows it’s the right place. Everything just ‘clicks’ and a feeling of bliss overcomes. For me Chicken was such a place. I could imagine living here for a summer, perfectly content to sit on the porch and people watch. Of course, it could have been my state of mind – we had been rushing and traveling and touristing for weeks and I think I was ready to stop and just watch other people race around for a while.

We continued on up the road to Top of the World Highway. To get there, you need to do the thirteen miles of the Taylor to the Boundary Road. Those thirteen miles are the worst of the entire road between Tetlin Junction and the Dawson Ferry. The road is narrow, winding, and edged by steep cliffs. But, if you take it slow, it really isn’t so bad. The most difficult part is passing another vehicle on the skinniest parts. Since we have a toad with a surge brake, it would be doubly difficult – we can’t back up. Had we encountered another class A with a toad, it could have been ugly in one or two spots. But, we didn’t – the road isn’t that well traveled and so those last miles were uneventful, even as rain fell. 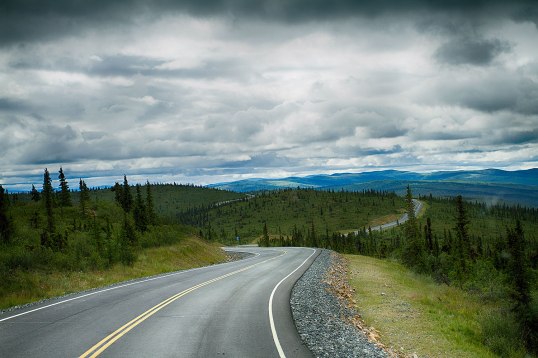 Paved highway to the border

We quickly covered the remaining well paved miles to the border. At the border, because we had a shotgun with an expired entry permit, we had to go inside. It took a while; the computer connection went down right in the middle (of course) and traffic backed up. There was a giant tour bus, a class C, and about six cars – all had made it those thirteen miles. We also passed half a dozen rigs (buses and class As) going the other way. As we haven’t heard of a major accident on the Taylor, we assume they made it, too.

Top of the World Highway

The Top of the World Highway, once the Canadian border is crossed, is gravel with occasional ruts, washboards, and paving. The views are beautiful, the road doable. We saw a lot of caribou, many birds, and a lot of squirrels. The weather alternated between drizzle and cloudy. It was over quickly and we found ourselves in line for the ferry.

On the Dawson Ferry

It was more scary watching the boat from shore than it was actually being on the ferry. The captain used the current of the Yukon to swing the ferry around then powered it to the other shore. It took all of five minutes and we were safely back on land. The ferry hands were excellent in maneuvering us onto and off the ferry, taking care to make sure we approached correctly to keep from dragging. They were very good at their jobs.

We desperately needed a rig wash and there were two in town. We picked one, washed the dust off the rig, then settled on a campground. None of them were overly appealing, being squishy tight and on gravel, so we picked the better of the two: Dawson City RV Park. It was only better in that the spaces seemed just a few inches wider and the rigs weren’t arranged helter skelter anywhere they could fit. It also turned out to be only $32CAD per night as they no longer offered cable tv.